Patsy lived in a nursing home for people with learning disabilities. When she developed dementia, the staff at her home signed up to a national training programme in end of life support. Here, home manager GERARD WAINWRIGHT tells the story that won his team the Linda McEnhill 2010 Award.

Patricia Healy (known as Patsy) lived at Heatherstones Nursing Home for about eight years. On admission she was an outgoing lady, who was full of life and still retained some of the independence that had helped her lead a full and active life. She had previously lived with her family in Ireland. One of her achievements had been to take part in the disabled Olympics.

Following a diagnosis of dementia, Patsy gradually lost many of the skills she’d previously possessed and became more dependent on the staff to meet her needs. She lost the ability to mobilise and feed herself. Her sister Margaret  took a keen interest in ensuring Patsy received the best possible care at Heatherstones. Indeed, it was Margaret who first brought the Gold Standards Framework (GSF) to the attention of the team, as she believed that it would be of benefit to her sister, and ultimately to all the clients at Heatherstones.

The Gold Standard Framework (GSF) is a systematic evidence based approach to optimising the care for patients nearing the end of life. It runs a national training and quality assurance programme for care homes, aimed at building confidence and experience, and based on up-to-date evidence of best practice.

In order to meet the GSF, our team had to complete a comprehensive training programme. To achieve and maintain GSF accreditation we had to provide evidence of best practice:

The GSF helped us to identify Patsy’s palliative care requirements, assess her needs, symptoms and preferences and plan her care accordingly. The “prognostic indicator guide” and “coding register” enabled us to plan her care in the final years, months, weeks and days of life – this helped us identify the support she required at different stages.

Expect the worst but hope for the best

Patsy showed a quite gradual deterioration in her health. Typically a period of ill-health such as a chest infection would be followed by a reasonable period of stability. Gradually she spent more time being cared for on her bed with shorter periods spent mixing with her fellow clients in the lounge area.

In line with the GSF, a multi-disciplinary meeting was held with Patsy’s GP, her sister, her Named Nurse and the Home Manager. We put in place an Advance Care plan detailing Patsy’s and her family and carers’ wishes for her end of life care. Everyone strongly agreed that it was in Patsy’s best interests to be cared for in the familiar surroundings of Heatherstones, surrounded by her family, carers and loved ones. Anticipatory medication was also put in place to meet her possible future needs for pain and symptom control. Our practice was guided by a maxim used frequently in GSF: to expect the worst but hope for the best.

When Patsy’s care needs increased, the GP and District Nursing team provided much support. The Community Macmillan Nurse (who had helped us to achieve GSF accreditation) was also able to provide invaluable help and advice.

Throughout this time Patsy retained a great deal of personality, charm and strength of character and this spark remained an essential part of her. People often said what a big impact she had on those she knew and what a strong presence she retained at the home.

For me, one of the most rewarding aspects of supporting Patsy was being able to provide an environment where her relatives felt comfortable to spend time with her. Her sister was with Patsy for much of the time during the last week of her life, sometimes spending the night in her room in an easy chair. We gave her the opportunity to help with Patsy’s personal care, so she felt she could provide practical as well as emotional support. Patsy’s elderly father was able to visit and spend time with her, as well as her brothers, nieces and their young families. The local Priest was a regular visitor – Patsy was raised with a strong Catholic background, and her religion, although no longer so significant to her family, was acknowledged to be a source of comfort to her.

Far from being a sombre time, Patsy’s last week was full of happy memories. In line with her Advance Care plan she had her favourite Irish music and Daniel O’Donnell CD’s playing. Her family put on a number of videos of her at dances, weddings and other happy family occasions. There was lots of laughter during this time, as well as tears and reminiscences about her life. We took photographs to provide a lasting visual record of what was a very precious time for her and her family – this was later presented to them as a gesture of thanks and appreciation from everyone at Heatherstones.

Patsy’s sister Margaret often commented that in her final week, she looked more relaxed and peaceful – serene as she described it – than she had seen her for a long time. During her final days there were a number of occasions when it seemed that her time had come. At such times Margaret always wished to be alerted so she could be with her when she died. In the end Patsy died shortly after her sister had gone home for the evening. Her family’s wish was that she should remain at Heatherstones overnight, so she would not be alone.

Patsy’s funeral was a fitting tribute to a full and happy life which reached a dignified and peaceful conclusion.

Following the introduction of the GSF at Heatherstones, end of life care has undoubtedly been given greater thought, including the discussion of people’s preferences, effective symptom management, dignity, respect and humanity, bereavement support and co-ordination of care. In the case of Patsy it had a profound impact on the quality of end of life care she received, and provided a framework upon which to plan her care, as well as providing clear guidance of best practice for those of us supporting her. Having  GSF accreditation not only gave the staff team the skills to optimise Patsy’s quality of life; it also enabled us to provide support for her relatives and each other. Patsy died free from pain and distress, surrounded by those closest to her in a peaceful, positive and dignified environment. 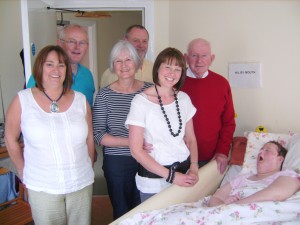 Patsy Healy surrounded by members of her family

Patsy Healy surrounded by members of her family